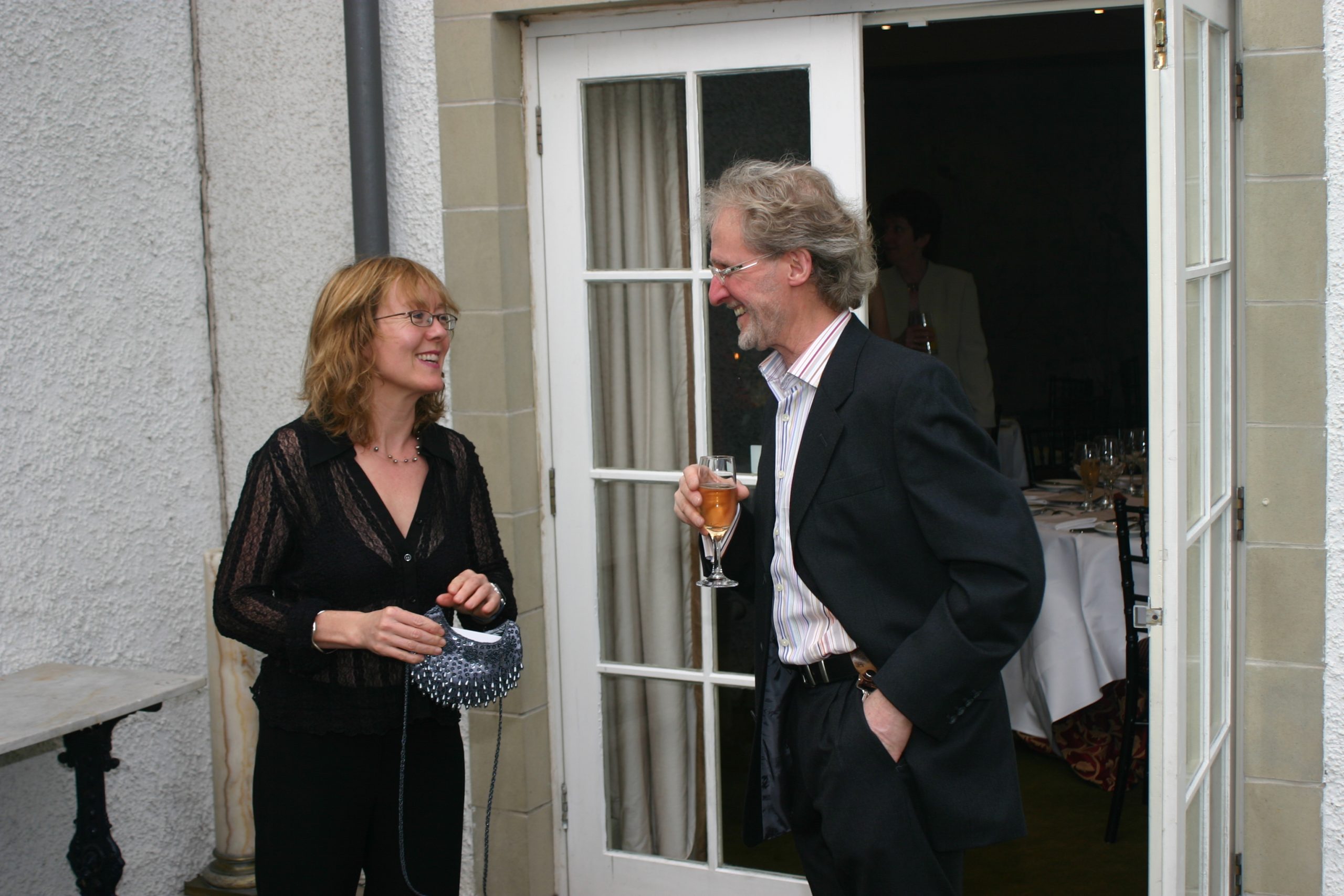 We are saddened to inform you that at the end of 2020 we lost our founding partner, Murray McGrath, who many of you will have been treated by over the years. Cameron Optometry started out as W M McGrath Optometrists, before becoming McGrath and Cameron in the early eighties. Here Donald Cameron, OBE shares some background on Murray, a colourful character who specialised in contact lenses long before they were commonplace.

Born in June 1936, Murray McGrath was educated at Melville College in Edinburgh where he was a keen water polo team player and won the annual Crombie Cup as best swimmer of his final year. He carried on that love of swimming throughout his life as a member of Drumsheugh Baths where, even in his late 70s, he was able to swing on the rings from one end of the baths to the other without so much as a wet foot.

He started work as an ophthalmic optician (what we now call an optometrist) in the long-established practice of his father W M McGrath in Queensferry Street. After a few years he started to see contact lenses as the way of the future for him and he started a part-time practice on the ground floor of the family home at 4 Randolph Cliff. After a number of years that business grew and it became his full-time place of work.

I met Murray when I completed my degree course in 1976. I had to do one year under supervision before being let loose on the public alone and he looked after me for two days a week with the other 3 in the family practice up the road. By that time W M McGrath was retired and Jimmy Duffy and Sandy Bovaird took me under their wing.

Over the next four years I learned from Murray about how to maintain high standards of care and how to fit the most complicated sorts of eyes with contact lenses. He was an innovator, often designing little devices to achieve a particular end. He polished hard contact lenses in the practice, made moulds for taking impressions of the eye for scarred eyes and always he would strive to improve on what everyone else was doing at the time. He never took the status quo for granted, always seeking to develop the service he could offer.

In 1981 I suggested to him that I would like to join him as an equal partner and so we negotiated that and I’ll just say that it was on conclusion of that financial deal that Murray bought his Ferrari Quatrovalvoli! I recall getting it into first gear on a cold morning was impossible so he had to slip the clutch in second. I told him to complain but he was told it was a feature of the car – a feature? If it had been an Austin Maxi it would have gone back as faulty! But we had some fun with that car.

Over the years the contact lens practice developed into a full-time venture although Murray never really worked what you would call ‘full-time’ and he encouraged me to work a four-day week, so Wednesdays were my day off. I maintained that habit throughout my professional career and I am sure the sensible work/life balance was why I remained an enthusiast for my work for the next 30 years.

Murray was never obsessed with making money although when it was there it went on vehicles of all sorts, practical and totally crazy. Murray loved fast cars, bikes and speedboats. He did some single seater racing at Ingliston and at one point he had five motor bikes of various sizes and makes, three cars and a three-wheeler. Some of that rubbed off on me and I did some rally driving early on and have had a series of motor bikes all of my working life. Every lunch time we used to travel across Edinburgh on the bikes, driving in parallel like the police, feeling cool. We lunched at the Engine Shed where they took on children with a variety of learning disabilities and served a fine variety of vegetarian food. I put up with the food because it was nicely done, but Murray always ate veggie food and it could not have been less processed unless you dug it out the ground yourself.

Murray never married although he came close to it more than once and he was never short of having a lady on his arm when the occasion required it. His most endearing feature was his optimism and decision to see the best in everything. One day he announced he was driving his 1200cc Kawasaki to France to have a 14-day holiday with a female friend. Four days later he appeared in the practice with the story that when he arrived after the two-day trip, things had not gone as expected and the relationship ended rather abruptly. So, he set off for the two days trip home. I commiserated with him over the waste of the journey and he then told me how wonderful the journey had been with the stunning sunset, the warm driving in the sunshine and the views in France. He never mentioned that event again and never seemed to wallow in distress over anything.

In 2001 we realised the business needed to expand from the constraints of the small space available at Randolph Cliff and after looking for two years we found a property at St Vincent Street. I bought the property and Murray decided that he should gradually retire over the next five years and so a smooth transition took place. After a few years my son, Ian, was returning to Edinburgh as a fully qualified optometrist and we created a space for him and Murray slipped out quietly into retirement.

Murray was a keen jazz enthusiast, amassed a huge collection of his favourite recordings, and played the guitar in a band. He also published a book of witty and thoughtful poems and was waiting for a response from a publisher for his long-gestated book outlining his theories on how to have a good life. Murray also fancied himself as an artist – though his art teacher was slightly less convinced!

He had always been an animal rights campaigner long before that was a trendy thing to be, and he worked with Advocates for Animals all the years I knew him. He had been a supporter of the naturopathic philosophy made known in Edinburgh by the Kingston Clinic in Gilmerton for many years. I don’t think he ever registered with a GP and when he went into hospital he found that that, and his optimistic approach to life, convinced him that he could be happy in any circumstance and he certainly seemed to achieve that. Unfortunately, because of the restrictions I was never able to visit him in hospital, but I was reminded how he never focused on himself for long and it was a blessing for Murray that his stay there was very short and he passed away quietly in the Royal Infirmary of Edinburgh.

He led an interesting life, was never attracted to being in the limelight but he shone a light on the path for others to follow and if they achieve his level of contentment then his time here will have been well spent. I am grateful for having known him and for the happy 30 years we worked together so harmoniously.

He is survived by his brother David, who lives with his wife, Karen, in Richmond.

This website uses cookies to improve your experience while you navigate through the website. Out of these, the cookies that are categorized as necessary are stored on your browser as they are essential for the working of basic functionalities of the website. We also use third-party cookies that help us analyze and understand how you use this website. These cookies will be stored in your browser only with your consent. You also have the option to opt-out of these cookies. But opting out of some of these cookies may affect your browsing experience.
Necessary Always Enabled
Necessary cookies are absolutely essential for the website to function properly. These cookies ensure basic functionalities and security features of the website, anonymously.
Functional
Functional cookies help to perform certain functionalities like sharing the content of the website on social media platforms, collect feedbacks, and other third-party features.
Performance
Performance cookies are used to understand and analyze the key performance indexes of the website which helps in delivering a better user experience for the visitors.
Analytics
Analytical cookies are used to understand how visitors interact with the website. These cookies help provide information on metrics the number of visitors, bounce rate, traffic source, etc.
Advertisement
Advertisement cookies are used to provide visitors with relevant ads and marketing campaigns. These cookies track visitors across websites and collect information to provide customized ads.
Others
Other uncategorized cookies are those that are being analyzed and have not been classified into a category as yet.
SAVE & ACCEPT